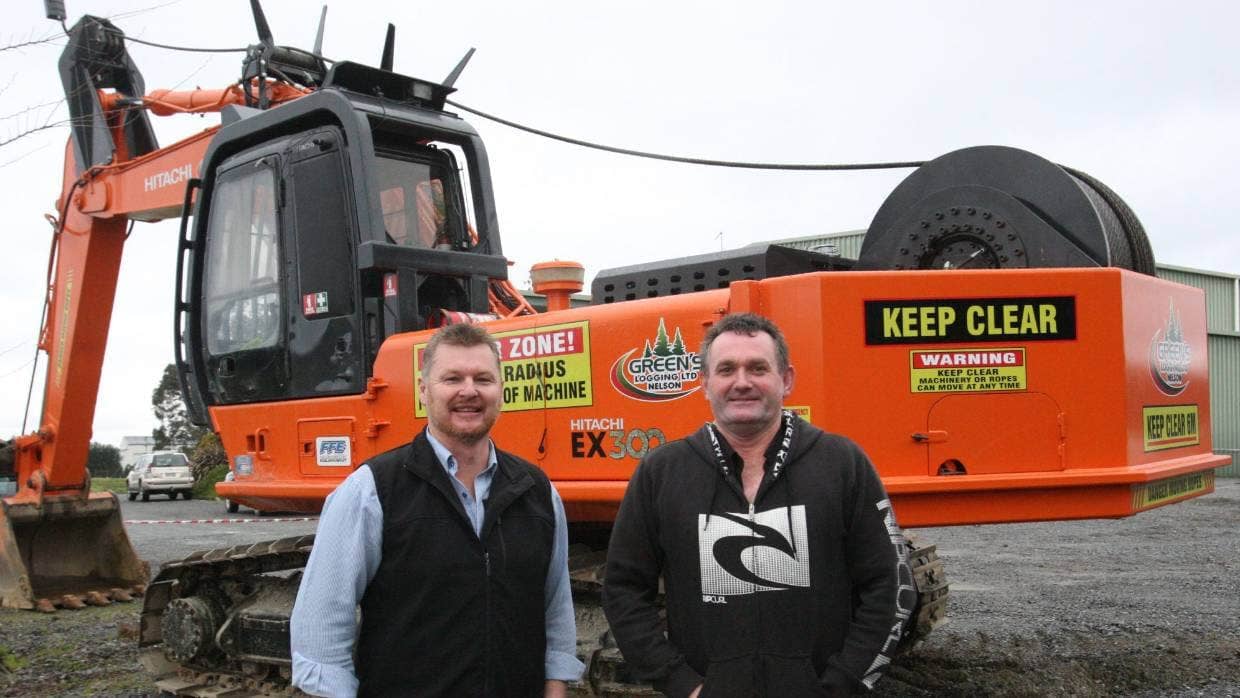 Ewers, the chief executive of DC Equipment, and Moutere Logging, flew out to South America this week  with DC Equipment’s general manager Frankie Davidson, to formalise a support company that will back up their machinery exports .

But for Ewers the gains were not all about seeing his ideas turned into machinery or his company’s performances improve. It’s just as much about making sure men who work in the forest get home each night.

The breakthrough came in 2010 when Ewers decided he had to get all his forestry crewmen into cabs.

So started the  development of DC Equipment’s remote radio controlled Falcon grapple carriages, which slide down hauler  ropes and pick up logs  so they can be dragged up to the skid. The design removed one of the most dangerous jobs in the bush – breaking out.

At the same time Ewers and his team designed a winch-assisted radio controlled feller buncher for steep  slope harvesting. The system sees a manned feller-buncher (a digger with a  felling head) tethered  by a cable winch to a second radio controlled digger parked on the skid site. The operator controls the winch feed and gets feedback from the stationary machine, which in turn acts like a block and stablises the feller-buncher. This system removed the need for  manual felling on steep slopes – another of the industry’s most dangerous jobs.

Ewers said  the designs came to the attention of Chilean foresters visiting New Zealand in 2012. When Ewers spoke at the International Steep Slope Harvesting Conference the following year the Chileans looked over his operations.

The relationship developed and DC Equipment was soon exporting its unique steep slope equipment into Chile.

“The biggest problem we have had is providing back-up support,”  said Ewers. Hence the pair’s current trip to South America.

Ewers hasn’t stopped  designing. He has been trialling a prototype felling carriage which he hopes to be marketing early next year and talks of the possibility of round-the-clock radio controlled logging in the near future.

In-line with the design and development of machinery has been the growth of DC Equipment, which  started with one mechanic in 2004 and now has 29 staff. Ewers said the  work has been largely self-funded, although Callohan Innovations recently granted the company funds to help develop its felling carriage.

NZ Trade and Enterprise had also stepped up and provided awesome support both nationally and in Chile for the company’s project.”They have been fantastic.”

Davidson said the company’s expansion had flow-on positives for supporting Nelson industry. The company was not just about innovative engineering. There was also a huge technology component involved, including building GPS equipment and cameras.

“We don’t want to put a dollar figure on at this stage but the exports holds huge potential for the company and the community at large,” Ewers said of the deal.

But while returns and production track upwards the best result for Ewers has been the sharp drop in reported incidents across his 14 crews.

The figures speak for themselves.

PrevPreviousFalcon flies on the slopes

Falcon flies on the slopes

If you need a clear demonstration of how safety conscious harvesting contractors have become in the past decade, the sale of the 150th Falcon Winch-Assist machine provides convincing evidence.

For the past decade, Nelson businessman Dale Ewers’ goal has been to get workers in the logging industry out of harm’s way.